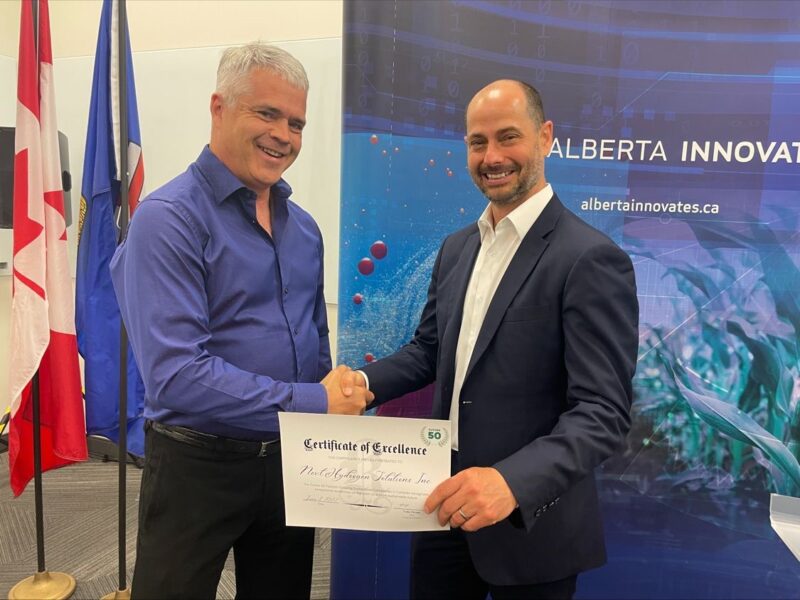 Allan MacKenzie, Chair of the Board of Next Hydrogen Solutions accepts the Certificate of Excellence from Toby Heaps, CEO, Corporate Knights. Next Hydrogen was ranked #1 as the Fastest- Growing Publicly Traded Sustainable Company in Canada.

Calgary, June 3rd, 2022 – Next Hydrogen Solutions Inc. (the “Company” or “Next Hydrogen“) (TSXV:NXH, OTC:NXHSF), a designer and manufacturer of electrolyzers, is pleased to announce that Corporate Knights, a Canadian media and research Corp committed to advancing a sustainable economy, has ranked Next Hydrogen first amongst the publicly-traded companies in its future fastest- growing sustainable companies in Canada ranking. This new ranking from Corporate Knights pinpoints the fastest-growing Canadian companies whose business activities align with the transition to a clean energy economy.

“Next Hydrogen is honored to be recognized as the future fastest growing public sustainable company in Canada,” says Raveel Afzaal, President and CEO of Next Hydrogen. “Our revolutionary and scalable electrolyzer cell design is expected to deliver the lowest cost of green hydrogen and help accelerate decarbonization in Canada and around the world.”

Next Hydrogen has experienced tremendous growth over the past 12 months which includes raising $55.5M in capital, growing the team to 50 employees, moving into the manufacturing facility with up to 40MW of annual production and announcing new partnerships with Black and Veatch, Hyundai and Kia and NYSERDA.

“All companies are now in the business of dealing with climate change. The Future 50 are full of solutions to accelerate the clean energy economy, and they are putting them on the shelf faster than any other companies in Canada. Our reason for devising this list is our belief in the success of these companies being pivotal to creating a more sustainable Canada, as well as acting as inspiration for other entrepreneurs,” says Toby Heaps, founder, and CEO of Corporate Knights.

About Next Hydrogen
Founded in 2007, Next Hydrogen is a designer and manufacturer of electrolyzers that use water and electricity as inputs to generate clean hydrogen for use as an energy source. Next Hydrogen’s unique cell design architecture supported by 39 patents enables high current density operations and superior dynamic response to efficiently convert intermittent renewable electricity into green hydrogen on an infrastructure scale. Following successful pilots, Next Hydrogen is scaling up its technology to deliver commercial solutions to decarbonize transportation and industrial sectors.

Cautionary Statements
This news release contains “forward-looking information” and “forward-looking statements”. All statements, other than statements of historical fact, are forward-looking statements and are based on expectations, estimates and projections as at the date of this news release. Any statement that involves discussions with respect to predictions, expectations, beliefs, plans, projections, objectives, assumptions, future events or performance (often but not always using phrases such as “expects”, or “does not expect”, “is expected”, “anticipates” or “does not anticipate”, “plans”, “budget”, “scheduled”, “forecasts”, “estimates”, “believes” or “intends” or variations of such words and phrases or stating that certain actions, events or results “may” or “could”, “would”, “might” or “will” be taken to occur or be achieved) are not statements of historical fact and may be forward-looking statements. Forward-looking statements are necessarily based upon a number of estimates and assumptions that, while considered reasonable, are subject to known and unknown risks, uncertainties, and other factors which may cause the actual results and future events to differ materially from those expressed or implied by such forward-looking statements. Such factors include, but are not limited to: the risks associated with the hydrogen industry in general; delays or changes in plans with respect to infrastructure development or capital expenditures; the uncertainty of estimates and projections relating to costs and expenses; failure to obtain necessary regulatory approvals; health, safety and environmental risks; uncertainties resulting from potential delays or changes in plans with respect to infrastructure developments or capital expenditures; currency exchange rate fluctuations; as well as general economic conditions, stock market volatility; and the ability to access sufficient capital. There can be no assurance that such statements will prove to be accurate, as actual results and future events could differ materially from those anticipated in such statements. Accordingly, readers should not place undue reliance on the forward-looking statements and information contained in this news release. Except as required by law, there will be no obligation to update the forward-looking statements of beliefs, opinions, projections, or other factors, should they change.